It is a project of the North American company Cummins, in partnership with Spanish corporation Iberdrola
Supondrá una inversión de 60 millones de euros y generará unos 350 empleos en un plazo de dos años
Toledo, May 24, 2021.- The Fuensalida Palace has been the place chosen for the presentation of one of the most outstanding investment projects for the region in recent years, which will mean the creation of one of the largest electrolyser gigafactories in the world; a technology that makes possible the electrolysis of water, thus obtaining hydrogen; a gas that is a pillar for the energy transition.
In addition to the heads of Cummins and Iberdrola, Tom Linebarger and José Ignacio Sánchez Galán, the event had broad institutional support, highlighting the presence of the Prime Minister, Pedro Sánchez; the regional president, Emiliano García-Page; the fourth vice president and minister for the Ecological Transition and the Demographic Challenge, Teresa Ribera; the minister of Industry, Commerce and Tourism, Reyes Maroto; the president of the Cortes, Pablo Bellido; the regional minister of Business Economy and Employment, Patricia Franco; the minister of Sustainable Development, José Luis Escudero; the mayor of Toledo, Milagros Tolón; and the Government delegate in Castilla-La Mancha, Francisco Tierraseca, among others.
The plant, which will initially have 22,000 square meters, is expected to be operational in 2023, with a production of 500 MW / year and with the aim of increasing its capacity to more than 1 GW / year. It will involve an investment of 60 million euros as well as the creation of 350 new jobs.
Beyond the significant economic and employment impact that the project will have in the region, it is an action that will be aligned with the ‘Strategic Plan for Energy Development of Castilla-La Mancha. Horizon 2030 ‘, which will be submitted to public information next June, as well as the Hydrogen Roadmap, approved by the Council of Ministers last year and which will be key for Spain to achieve climate neutrality, with a 100% renewable electricity system, no later than 2050.
Pedro Sánchez recalled that the Recovery Plan “includes a specific section focused on green hydrogen, which will be endowed with 1,555 million euros over the next three years and the commitment to this technology will stimulate investors to mobilize up to 8,900 million euros within the next decade, with support from the public sector.”
According to different estimates, hydrogen will have a strong expansion until 2030 and in 2050 it will represent a third of the fuel used in land transport and 60% in maritime transport.
In this sense, the effect of green hydrogen on the environment will be decisive, since each kilogram of green hydrogen that replaces a fossil one will prevent the emission of 9 kilograms of CO₂ into the atmosphere, said Sánchez, who pointed out that the modernization of Spain requires effort and ambition to achieve 74% renewable electricity generation, 42% renewable energy in final use in 2030 and full decarbonisation in 2050.
This new gigafactory will reinforce the positioning of Castilla-La Mancha as a benchmark region in terms of green hydrogen, thus joining the National Hydrogen Center (CNH2), located in Puertollano, and which has become one of the main centers for scientific research and technology of hydrogen technologies and fuel cells at an international level.
In the words of the regional minister of Economy, Business and Employment, Patricia Franco, “with this project we position ourselves at the forefront of innovation and technology in the green hydrogen sector, moving towards a more modern, more industrial, more sustainable and greener economy”.
IPEX director, Luis Noé, has also shown his satisfaction at having managed to get two companies of the stature of Cummins and Iberdrola to choose Castilla-La Mancha for a project of this magnitude, highlighting that “now is the time to continue working to achieve that the new plant is a reality as soon as possible”.
IMAGE GALLERY 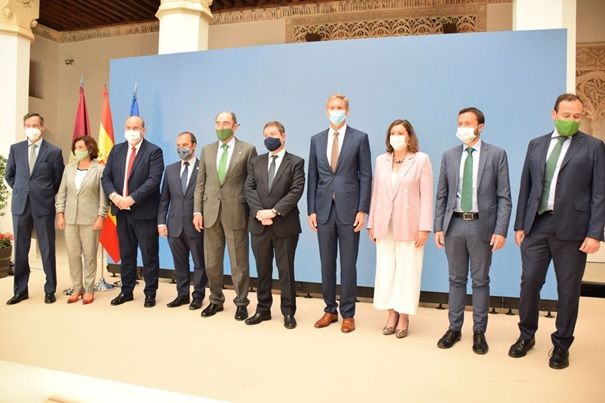