Puertollano hosts the constitutive session of this body, which will work to attract foreign investment to Castilla-La Mancha

It arises with a vocation of joint commitment between the institutions to make visible the industrial capacity of the municipalities and attract wealth.
The event served as a stage to present the new Strategic Plan for Investment Attraction of Castilla-La Mancha for the period 2021-2025.
Puertollano (Ciudad Real), June 21st, 2021-. The Cristina García Rodero Museum in Puertollano has been the place chosen to hold the first Foreign Investment Council of Castilla-La Mancha, which was chaired by the Regional Minister of Economy, Business and Employment, Patricia Franco.
This new advisory body, created by Decree 50/2021, of May 4, was born with the aim of promoting public-private collaboration, creating synergies that allow the attraction of a greater number of investments to the region.
In addition to the Regional Minister, the first plenary session was atended by the General Director of Companies, Javier Rosell; the mayor of Puertollano, Isabel Rodríguez; Carmen Olmedo, delegate of the JCCM in Ciudad Real; the director of IPEX, Luis Noé; Francisco Valera, Gonzalo Redondo, Elena Carrasco, Susana Alcalde and Fernando Muñoz, representing respectively the Provincial Councils of Albacete, Ciudad Real, Cuenca, Guadalajara and Toledo; Miguel Ángel González Lajas on behalf of the Castilla-La Mancha Institute of Finance; Juan Martínez Moraga, from the Regional Council of Chambers of Commerce; Carlos Marín, from CECAM; Javier Pasamontes, representative of the FEMP; and Marian Scheifler, from the consultancy company Sifdi.
During her speech, Patricia Franco explained that the new participation body “makes Castilla-La Mancha the first Autonomous Community to join the commitment of all public institutions and private initiative in attracting investment”, and stressed that Castilla-La Mancha is the region in which foreign investment in immobilized stock has grown the most throughout the country, a figure that reinforces the confidence that investors have been showing in our region. The counselor has highlighted the importance and the specific weight that foreign investment has in our region, “where it represents 13 percent of the total turnover of our companies, 6 percent of employment and 32 percent of our exports”, which is why it has valued the creation of the new Council “to keep working together to improve these indicators and to continue positioning Castilla-La Mancha as the industrial epicenter of the country”.
For his part, Javier Rosell has presented the functions and objectives of the Council, trusting that this body will help strengthen the industrial fabric of Castilla-La Mancha, while the mayor wanted to thank the regional government for its commitment to supporting Puertollano as a priority in its economic promotion strategy.
Luis Noé has presented the new Strategic Plan for Investment Attraction in the region for the period 2021-2025, which has set four priority objectives: “to maintain the region’s position as an attractive and differentiated investment destination, to attract the implementation of sustainable investments in Castilla-La Mancha, maintaining and expanding existing investments through permanent communication with already established projects and enriching the investment climate of our region.”
The Council will be itinerant, with the aim of giving visibility to all the industrial areas of the region, with the next one scheduled to take place in the province of Albacete.
GALERÍA DE IMÁGENES 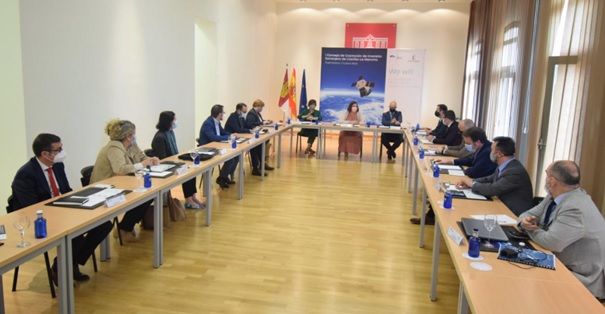