Castilla-La Mancha, one of the Spanish regions with the highest investments in renewable energies

Invierte en CLM » Castilla-La Mancha, one of the Spanish regions with the highest investments in renewable energies

The region remains on the national podium in terms of installed capacity for photovoltaic, solar thermal and wind energy.

Once again Castilla-La Mancha is among the first places of the national ranking in terms of capacity and generation of renewable energy, reinforcing the importance that this strategic sector has in our territory.

Regarding solar energy, Castilla-La Mancha is one of the Spanish regions with the highest solar irradiation, which affects the high profitability of its solar parks (photovoltaic and CSP) compared to the rest of Spain and Europe, and is a very attractive region for all types of sustainable investments. 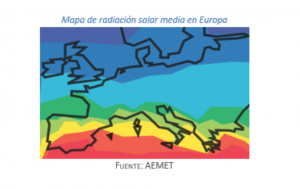 This strategic location is also reflected in the data on energy production: at the end of 2020, Castilla-La Mancha produced one fifth of the photovoltaic energy generated in Spain. With 3,081 GWh, the region was second only after Andalusia..

In addition, the regional government strongly supports the generation of clean energy, as shown by the Horizon 2020-2030 strategy on climate change.

In 2019, the government has approved an aid package worth 9.6 million euros, aimed at SMEs and large companies. The aid will be used to improve the energy efficiency of companies in the period 2020-2024.

Following this commitment to make Castilla-La Mancha a sustainable region, the regional Executive is launching an aid package of 31 million euros to further promote self-consumption.

As an initiative to further promote the self-consumption of energy, increase storage through batteries and improve air conditioning for the use of renewable energy, Castilla-La Mancha launches a package of six lines with 31 million euros, which includes companies as well as public administrations, regions, private individuals and the third sector. The Minister of Sustainable Development, José Luis Escudero, announced that the budget will be increased if necessary and “when we are able to execute 100% of the aid”, as they are linked to the European recovery funds Next Generation-EU.

The aid will be distributed among six incentive programs to improve the competitiveness of companies in reducing energy costs. This is also intended to reduce the price of electricity bills for neighbors, boost the regional economy and create jobs by focusing on sustainable development through renewable energy.

This aid is an important support for the development of new technologies, especially in terms of energy efficiency and sustainability, making Castilla-La Mancha a more competitive, dynamic and sustainable region.

Finally, line 6, with more than four million euros, is used for aerothermal, geothermal or biomass plants operated by private individuals, communities of owners and the public sector.

It is estimated that the impact of these subsidies will add 86.6 megawatts of installed renewable capacity, combined with self-consumption, to the region’s strategic mix. It will also create approximately 2,000 jobs and reduce CO2 emissions by more than 46,800 tons per year.

The year 2022 has just begun and the City Council estimates that Castilla-La Mancha will end the year with more than 7,814 MW of installed electrical energy from renewable sources. This means that the region will be 21% more sustainable than the national average.

From the Institute of Foreign Promotion of Castilla-La Mancha (IPEX) we accompany investors throughout the process and offer a wide range of free services: Search for opportunities, advice on aid and incentives, dialog with the various local and regional administrations and regional, etc. All information at https://www.investinclm.com/como-podemos-ayudarte/