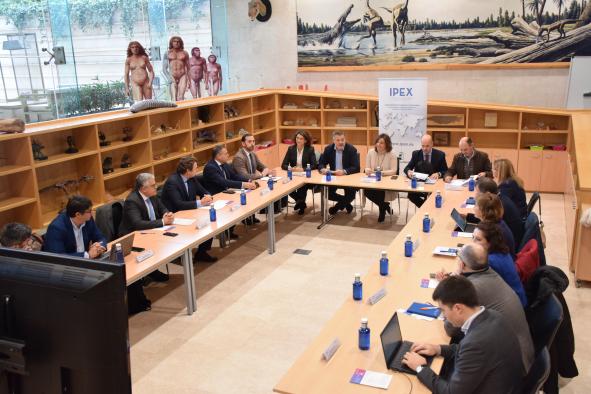 Cuenca, December 16th, 2022. – The Paleontological Museum of Cuenca was the venue chosen for the celebration of the third Investment Attraction Council of Castilla-La Mancha, an advisory body that was created with the aim of promoting public-private collaboration, creating synergies that allow the attraction of a greater number of investments to the region.

After the welcome by the Mayor of Cuenca, Darío Dolz, and the Vice President II of the Provincial Council of Cuenca, Elena Carrasco, the Council was opened by the Minister of Economy, Business and Employment, Patricia Franco, who has valued that the rate of attraction of investment projects and international reinvestment in the region has doubled in the current legislature with respect to the previous one, “from 56 that we got in the last one to 111 that we have accounted for in this one, with a total of 167 projects”. Figures that have also had an impact on direct employment derived from international investment in the region, “going from 31,000 jobs in 2015 to 60,000 today, which has a direct impact on the internationalization of our economy, and on the historical export data we are recording”. The Minister also highlighted the DIRCE figures published this week, which raise the number of active companies in Castilla-La Mancha to 129,626 on January 1, 2022, which means the consolidation of 1,953 new companies in 2021, and 3,840 more companies than there were in the region in 2015, having also recovered the levels prior to the health crisis.

For his part, the General Director of Companies, Javier Rosell, has reviewed the evolution of Foreign Direct Investment in the region over the last few years and its impact on the territory. The 310 companies with foreign capital present in Castilla-La Mancha are responsible for 32% of the total exports and generate 13% of the total turnover”. In addition, Javier Rosell also wanted to highlight the boost to the arrival of investment projects that has meant the Priority Projects Law, approved by the Regional Government in 2020. In just two years, 20 projects have been declared as priority projects, which represent an investment of more than 487.2 M€ and the creation of 745 jobs.

Then it was the turn of Luis Noé, director of IPEX, who presented the report of activities that the Institute for Foreign Promotion has developed in terms of attracting investment throughout 2022. A very positive year in which 69 investment projects have been managed, some of which have crystallized, such as the new data center that Meta will build in Talavera de la Reina or the leisure park that Toro Verde will build in Cuenca. He also had the opportunity to present the new geolocation tool, which will make it easier for investors to find industrial land in the region. This new tool will be complemented by the project management platform, also launched this year, which already has 122 municipalities in Castilla-La Mancha registered.

Lastly, representatives of ESRI, the company that developed the new geolocation tool, demonstrated its use and explained to those present the potential that the correct processing of data can have for the future development of the region.

In addition to all the speakers mentioned above, the Council was attended by representatives of the different Provincial Councils, the Regional Council of Chambers of Commerce, CECAM and the Spanish Federation of Municipalities and Provinces.

With the celebration of this third Council, the firm commitment of the Government of Castilla-La Mancha in terms of attracting investment is once again demonstrated, and the end of a 2022 that looks set to be very positive, since, in the absence of data from the last quarter, the investment flows received by the region throughout this year are already 173 million euros.