Cummins starts construction of its electrolyzer plant in Guadalajara 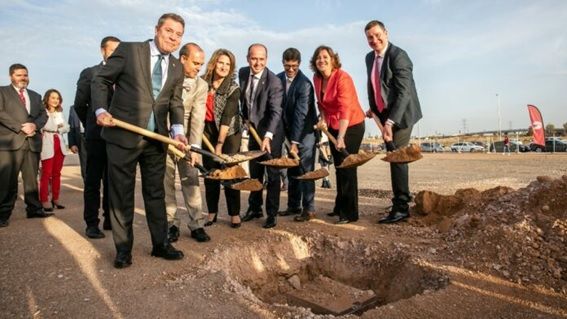 Last Friday, October 28th, the groundbreaking ceremony for the new factory of the North American company Cummins in Guadalajara, which will manufacture electrolyzers for the production of green hydrogen, took place.

The event was attended by a wide institutional representation: the third vice-president of the Government and minister for Ecological Transition and the Demographic Challenge, Teresa Ribera; the president of Castilla-La Mancha, Emiliano García-Page; the president of the Parliament, Pablo Bellido; as well as the Ministers of Economy, Business and Employment, Patricia Franco, and Sustainable Development, José Luis Escudero; the delegate of the Regional Government in Guadalajara, Eusebio Robles, and the mayor of the city, Alberto Rojo, together with representatives of the North American company, including its vice-president, Alexey Ustinov.

The plant, which will be used for the assembly and testing of the electrolyzers (with a production capacity of 500 megawatts (MW) of electrolyzers per year), is expected to start operations at the beginning of 2024. The land chosen by the U.S. company is located in the El Ruiseñor industrial park, in the municipality of Guadalajara.

The project, which will entail an investment of around 80 million euros and will generate 150 highly qualified jobs in its initial phase, and a further 200 jobs as production progresses, is strategic for Castilla-La Mancha, as it consolidates the region’s leading position in the green hydrogen industry.

During the ceremony, the head of the Castilla-La Mancha Executive, Emiliano García-Page, acknowledged the work of the regional administration in bringing this project to Guadalajara. Since January 2021, when the investment attraction team of the Institute for the Foreign Promotion of Castilla-La Mancha (IPEX) received the project, 21 months of work and coordination with the company and with different Regional Government Departments have been spent in order to offer the best solutions to the challenges that have been posed; an effort that has undoubtedly been worthwhile.