In an institutional initiative backed by the Regional Government through the Office of Economy, Business, and Employment and organized by the Institute of Foreign Promotion of Castilla-La Mancha (IPEX), attendees learned about the advantages and opportunities that Castilla-La Mancha offers as a premium investment destination.
This initiative will be continued in 2020 with a trade mission driven by the Institute of Foreign Promotion (IPEX) to accompany companies from Castilla-La Mancha in search of synergies.
Toledo, December 9, 2019 – More than 150 Mexican companies expressed an interested in the opportunities and advantages of investing in Castilla-La Mancha during an event organized by the Regional Government, through the Office of Economy, Business, and Employment. The initiative will be continued in 2020 with a trade mission directly promoted by the Institute of Foreign Promotion (IPEX), in which the Regional Government will travel once again to Mexico, accompanying companies looking to establish commercial partnerships with local partners.
Through intensive work agendas organized in Monterrey and Mexico City on November 27th and 28th, respectively, the Counselor of Economy, Business, and Employment of the Government of Castilla-La Mancha, Patricia Franco, presented the advantages and opportunities offered by Castilla-La Mancha as a premium investment destination. The Counselor also explained the policies developed by the Regional Government, led by Emiliano García-Page, to strengthen entrepreneurial activity and to attract foreign investment, especially in the region’s niche markets.
These niche markets include, among others, the aeronautics, metal-mechanic, logistics, and renewable energy sectors – for example, Castilla-La Mancha is the region with the greatest installed production potential for photovoltaic energy, the second greatest in thermosolar energy, and the third in wind energy, compared to the rest of the country. The region has also demonstrated growth in areas such as bioeconomics and ICT, as well as in traditional sectors like agri-food.
The region also boasts a privileged location – it is situated in the center of the country, bordering 7 other autonomous communities and providing access to 60% of the Spanish population –a wide network of infrastructure, which includes 670 km of high-speed rail, 2,770 km of high-capacity roads, and the possibilities offered by the airport in Ciudad Real, as well as its proximity to Madrid. Castilla-La Mancha benefits from stimulus policies and support for entrepreneurial activities, provided by the Plan Adelante, which, in its first edition, included 260 million euros.
The trade mission of 2020 will accompany companies from Castilla-La Mancha as they seek to find synergies to strengthen both the competitiveness of the region’s businesses and the attraction of foreign capital to the region. The mission will focus on companies from the more traditional industrial and technology sectors, as well as on newer, developing sectors like those related to circular economy models.
The working breakfasts in Mexico City and Monterrey (in the Club Industrial) were supported by the Economic and Commercial Office of the Spanish Embassy in Mexico and the by the Chamber of the Industry of Transformation of Nuevo León (CAINTRA). Both institutions assist with the promotion of collaboration between companies. Since 2015, exports from Castilla-La Mancha’s companies to Mexico have increased 67% and totaled nearly 100 million euros in 2018, with textiles, beverages, and mechanical devices leading the list of exports.
The breakfasts were attended by important companies like Aernnova (top-tier supplier of aeronautic structures), Brahm Precision Products (engineer specialized in the construction of components, parts, and accessories for motor vehicles to provide clients with the best quality, technology, and service available), CEMEX (construction company offering innovative solutions to clients in over 50 countries with a portfolio of cement, concrete, aggregates, and mortar), and Renovalia (leader in renewable energies which adds value to all phases of the supply chain, from the design and development of installations to management and operation). These companies provided testimonies from the vantage point of success stories – companies who had successfully invested in the region.
About CAINTRA
The Chamber of the Industry of Transformation of Nuevo León (CAINTRA) is the business organization which represents the industrial companies of Nuevo León. It promotes and provides services which facilitate optimal conditions to increase the competitiveness of its members. CAINTRA endeavors, in collaboration with its members, to address, attend to, resolve, and take advantage of shared opportunities and threats within the industry of Nuevo León.
About the Economic and Commercial Office of the Spanish Embassy in Mexico
The Economic and Commercial Office assists companies in the identification of potential relationships with partners (distributors, importers, agents, etc.) within a specific market. It also arranges a series of individual interviews for Spanish companies with potential partners, clients, or local entities.
GALERÍA DE IMÁGENES 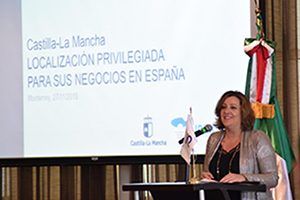 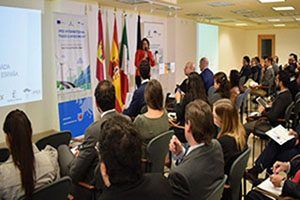 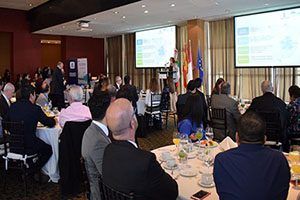