The Government of Castile-La Mancha has expressed its support to British-owned companies in the region for their activity and the development of investments in the new Brexit scenario.

The regional government has shared with the main UK companies established in the region the new scenario resulting from Brexit and has reiterated its comprehensive support in the development of new projects and the growth of their activity.
The Regional Minister of Economy, Business and Employment, Patricia Franco, has offered the direct dialogue of the regional government to convey to the UK Embassy the needs of companies established in the region, in a meeting she will hold with their representatives in the coming days.
Toledo, 27 January 2021 – The Government of Castilla-La Mancha has conveyed to British-owned companies established in the region the support of the regional government for the development of their activity and comprehensive support for their development and investment projects, in the new scenario brought about by Brexit since its entry into force on 1st of January.
The Regional Minister of Economy, Business and Employment, Patricia Franco, has conveyed this support to the heads of a dozen foreign-owned companies in the region, to whom she has also offered to dialogue with the UK Embassy in Spain to raise any proposals and concerns that may have arisen in view of the new situation.
During the meeting, held online, the Regional Minister of Economy, Business and Employment was accompanied by the General Director of Business, Javier Rosell, and the Director of the Institute for Foreign Promotion (IPEX), Luis Noé. During the meeting, Patricia Franco reassured the British-owned companies in Castilla-La Mancha of the support of the regional administration in the development of their activity, and also made available to them the tools available to the regional government to guarantee this comprehensive support, as well as the development of new investment projects.
In this context, the Regional Minister highlighted the regional government’s support in obtaining Regional Incentives to support investment, and the work of the business support units created within the framework of the Priority Projects Act.
Furthermore, Patricia Franco has advanced to the British capital companies in the region her next meeting with representatives of the Embassy of the United Kingdom in Spain, offering this meeting as a forum for the regional government to raise the proposals, needs and concerns that the new Brexit scenario has generated in companies established in Castilla-La Mancha.
The Regional Minister reiterated the importance of maintaining a stable regulatory framework that guarantees the continuity of investment flows, given that the United Kingdom is the second country in foreign direct investment in Spain and in the last two years, 2019 and 2020, it is the fifth and sixth country, respectively, in the destination of exports from Castilla-La Mancha.

Some of the most relevant British-owned companies established in the region and which have actively participated in the event, formulating different questions and concerns related to the new post-Brexit scenario are:
In addition, it is also worth mentioning the attendance at the event of other British-owned companies based in Castilla-La Mancha, such as Logista Grupo, Onfab, BCA España, Enersonne, and Servicios Integrales ZIDAKEN.
IMAGE GALLERY 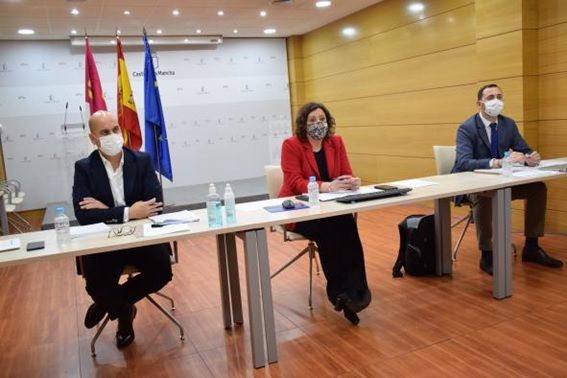